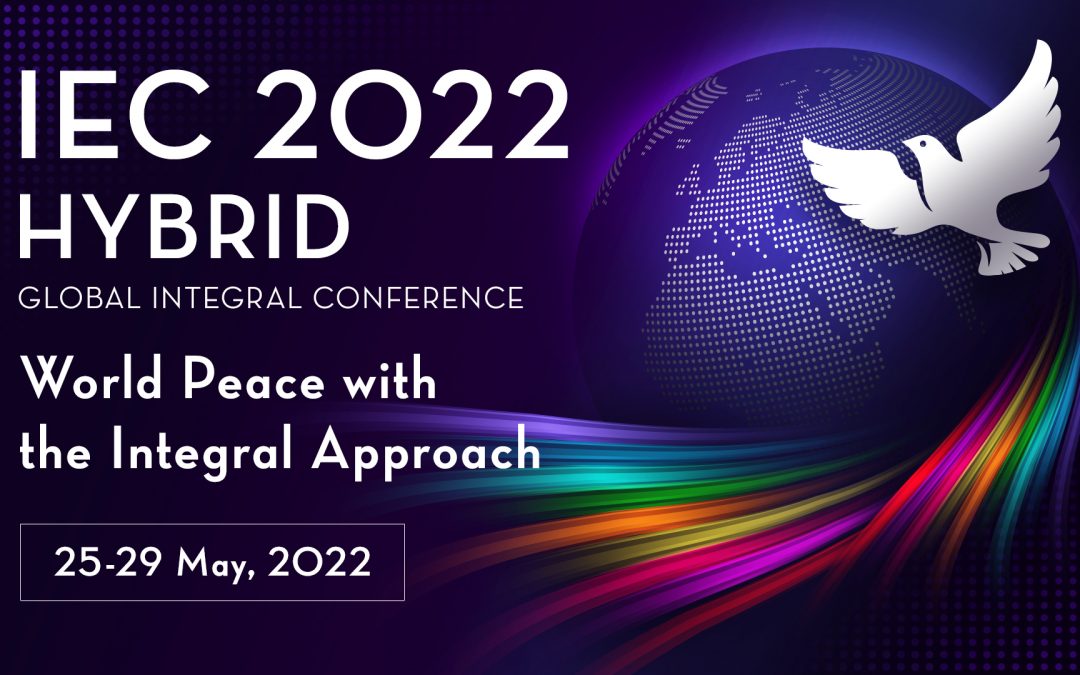 We have just announced that IEC 2022 will be online due to the uncertainty still caused by covid.
However, many people expressed their sorrow that they can’t come and meet the community, we decided that although this conference will be principally online, we created a new, hybrid format.

We will open a IEC Live Budapest Forum to enable those who can indeed come to actually meet in person!
More details soon.

World Peace with the Integral Approach

Also the international field has shifted in the last weeks and seems to be strongly centered around the war in Ukraine. Many have thought such aggression unimaginable in the 21st century. Today a war in Europe (and at other places) is not a local issue anymore, but a global issue, as countries and continets are intertwined through many cultural, political, economical and other threads. Thus the situation is timely to contemplate with psychological and spiritual awareness and wisdom on these issues.

The topic of World Peace has been there not only after the post II war Europe as a continental wish for peace and intercontinental political staibilty,  what we could call a worldcentric approach, but also became a center theme as a planetary aim, as the late worldcentric postmodern value system has developed since the 1960-ies. In integral terms a planetary wide world peace is one of the most important and natural goals of our green selves. Just think of the hippy peace sign or Lennon’s song Imagine.

Many have found that the green value system is very necessary but in itself not enough. While its light need to be included in an even further stage of evolution, its shadow is better to be transcended, because it contributes to the current problems in the world. Hence a post-postmodern integral wave has developed that suggest a more elaborate approach, for example the very awareness of not only the higher stages and their potentials, but also the earlier stages and its dynamics. We need timely knowledge and also inner openness to include all stages of development into a larger complexity if we aim for local and global peace and ultimately world peace.

In the conference though the Russian-Ukrainian war is a very timely and important issue we are not focusing only on that, but on the general issue of peace. In this we can also look at other timely conflicts that are also reflecting our global interconnectedness, such as Syria, Afghanistan, and conflicts in African countries, and contemplate the issue of peace both locally and globally. As IEC is primarily not a political debate forum, but politics is one aspect of the many, we will also look at other aspects of peace, aspects of human culture that can be seen as parts of a whole: political, economic, ecological, psychological, spiritual, cultural, healing, and historical perspectives from the global North, South, East and West, to name but a few.

It can help us find out how we can facilitate our individual and collective growth to create a future where we can all live our higher selves and achieve world peace. The integral approach helps us take a closer look at the topic.

We can look at peace within the different quadrants, see how higher states of consciousness are related to inner peace, and look into how inner states can help achieve outer peace in the world. We can take into account the lines (such as cognitive, ethical, spiritual, etc.) and the types, both in individuals and in collectives such as  cultures and nations. What does a peaceful world look like if we grow up, wake up, clean up, and show up? What can we achieve as one united humanity in a world at peace?

These are just some questions that are drawn from integral theory, but there are many other important viewpoints from the areas of psychology, trauma, and healing, to spirituality, finances, economics, politics, sustainability, and other aspects of planetary life.

We have also opened the application process for presenters.

If you’d like to present at this conference follow the link, read the instructions and apply!
Apply to Present