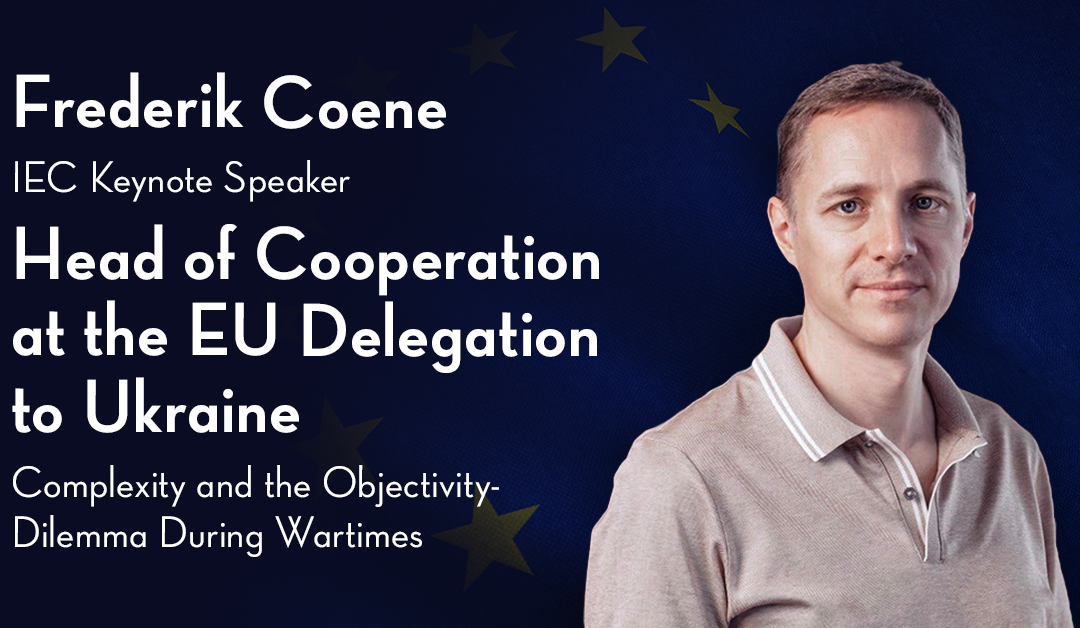 We are very glad to present to you keynote speaker Frederik Coene, EU diplomat based in Ukraine, heading the team in charge of all EU-funded development programmes in the country.

He will speak live in Budapest at IEC 2022, bringing a more critical view on Ukraine, the war, Russia, the EU and the whole situation.

Read more about him and his keynote speech!

Complexity and the Objectivity-Dilemma During Wartimes

The Russian invasion of Ukraine will have consequences for geopolitics and the world order that will be on par or even bigger than those of the collapse of the Soviet Union. Whether this will destroy our democratic Western civilisation or herald the beginning of a new societal model will to a large extent depend on the processing of the collective war trauma.
Theoretical and conceptual models are great topics for conferences and spiritual principles are inspiring and heart-warming during retreats, but do they make sense during times of war? Should we have compassion for Russians who support the atrocities of the Russian armed forces? Should we wish President Putin a speedy death? Is maintaining objectivity counterproductive for winning the war? Should we stick to the black-and-white narrative of ‘Ukraine defending democracy and fighting evil Russia’? Are we supporting Putin by speaking about interconnectedness and about the complexity of the roots of the war? Should we integrate ‘red’ by picking up arms?
During this speech, Dr. Coene will elaborate on these and other dilemma’s, with the aim of launching a critical debate.

Frederik Coene / Belgium
Dr. Coene is an EU diplomat based in Ukraine and heading the team in charge of all EU-funded development programmes in the country. His previous assignments were in Tajikistan, Georgia, and Belarus and prior to that he worked for humanitarian NGO’s in Chechnya and Abkhazia. He holds an MA in economics, and MA in Caucasian and Central Asian Studies, and a PhD in Political Science. In his free time, he is integrating the stages of development with the enneagram and spiral dynamics into a single framework using ancient Vedic wisdom on transpersonal development. He is also conducting research and lecturing on the topic of human sexuality and the enneagram/spiral dynamics.

The detailed program of IEC 2022 Hybrid is now available, take a look at the program overview!

Join us for IEC 2022 online or in-person in Budapest! Tickets for IEC 2022 HYBRID are on sale, visit the ticket shop for more info!