Downtown Budapest (TBA soon + registrants will be notified in email)

Location: Downtown Budapest (to be announced soon + registrants will be notified in email)

For IEC participants we offer a special price of €395!

You count as IEC participant, if you have bought your IEC ticket and with that registered to the conference.

Dr. Kegan will cover two workshops during the daylong:

Constructive-Developmental Theory: Stages in the Development of Our Meaning-Making

Come study the theory that helped create the field of Adult Development! Via brief presentations, videos, short exercises, and discussion, Harvard psychologist Robert Kegan will conduct a seminar on his seminal approach to the evolution of mindsets after adolescence.

How to Understand (And Overcome) Your ‘Immunity to Change’

This is an interactive, experiential workshop with Robert Kegan, the co-creator of a framework for personal improvement that is now used by individuals and organizations around the world. It will enable participants to better understand the “competing commitments” that currently thwart their best efforts to bring about any personal improvement–and provide them a new pathway for change that transcends the limits of the Will Power / ‘Dieting’ / New Year’s Resolutions model that influences us all.

We sell tickets only for the whole day! No half day tickets are available.

The 2 thematic parts create the daylong.

Be part of this experience!

Choose this if you have registered already to IEC and bought your conference ticket, and now you add Kegan

Choose this if you come only to Kegan’s Course and don’t come to the Integral European Conference afterwards.

Choose this if you want to come to the Integral European Conference and also Kegan’s course and you register and buy tickets for both now.

Dr. Kegan who worked together with Jane Loevinger and mentored Susanne Cook Greuter has one of the scientifically sound theories on which Ken Wilber has built his Integral Theory.

One could easily argue that Dr. Kegan’s own history, both personal and societal, conspired cunningly to set the stage for the development of a developmental stage theory.  Fate took the liberty of conveniently bilocating him in the middle as well as on the margins of life. Kegan occupied the center by being born the middle child of middle class parents in middle America at the middle of the 20th century.  Yet, equally, he was thrust to the periphery of normality courtesy of growing up Jewish in the homogeneously Protestant state of Minnesota, and perhaps also due to being a member of a family touched by tragedy—an unfortunate accident which left his older brother with life-altering injuries, and, thus, evermore encountering difference and discrimination.

The backdrop to this narrative’s unfolding was initially the cool, collected, clean-cut 1950’s, where order—prized after the chaos and ugliness of war—reigned supreme, and where roles and expectations were defined clearly.  Then, as a new decade dawned, came a quickening. A profoundly different way of perceiving and participating in reality was being born, and, with it, the radical alteration of day-to-day existence.

Solid structures morphed into shifting sands as change approached, and people everywhere broke free from the safe haven of tradition, found their own voices, and took a stand.  Meanwhile, a youthful Robert Kegan was coming of age at this precise historical juncture, undergoing the selfsame meaning-making transition in concert with the culture around him. This serendipitous convergence wound up being both a lifesaver for a man, and a godsend for human development. 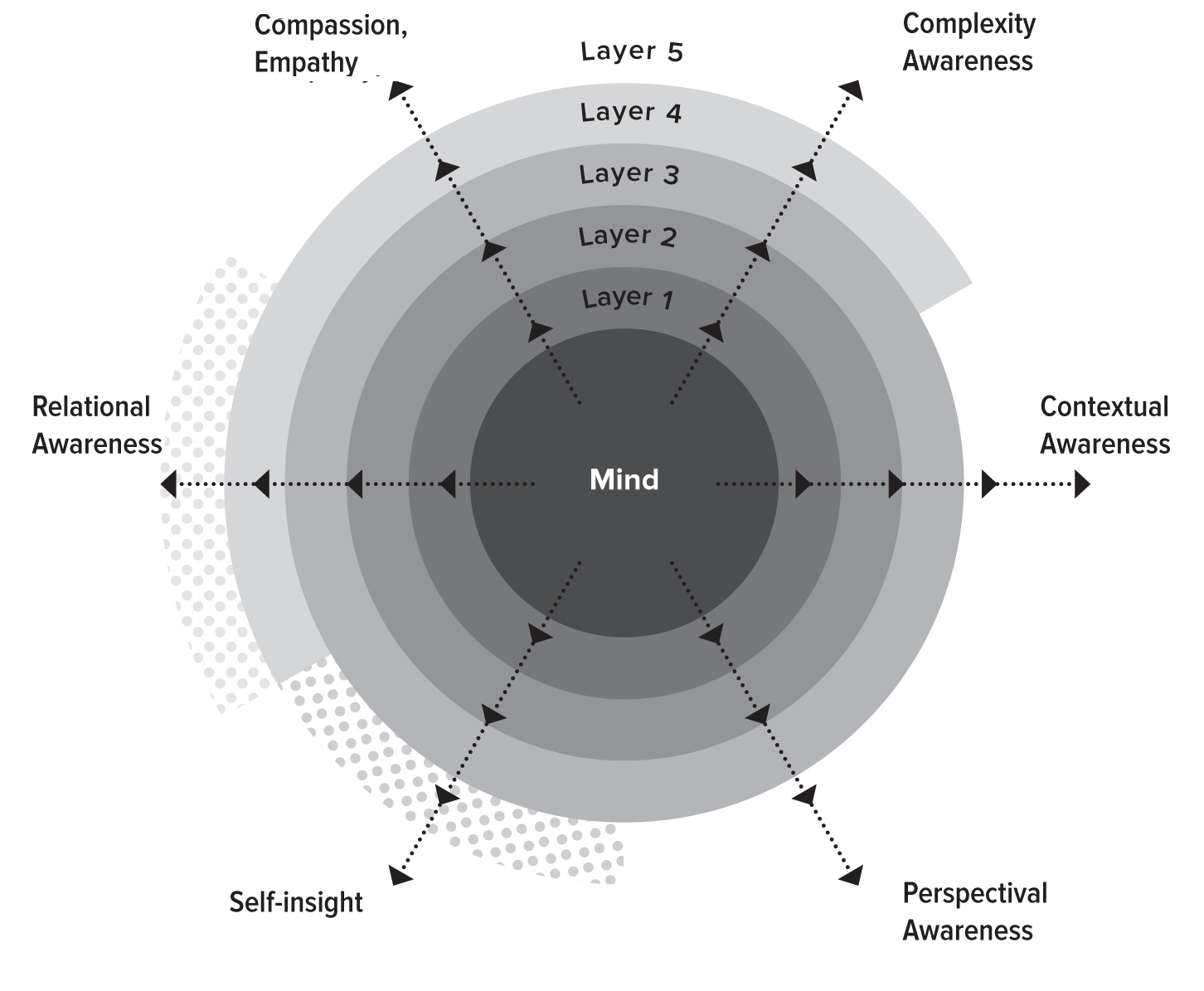 By choosing to be led by his inner compass, rather than aligning himself with his family or the establishment, Kegan turned away from fighting in what he believed to be an unjust war, and, as a result, also away from the postgraduate study of English Literature in Britain.  Instead he remained on his home turf and turned his attention toward the field of education, first teaching children then enrolling in an experimental, interdisciplinary, self-designed doctoral program at Harvard. This diverse and enriching environment became the fertile ground upon which Kegan cultivated his robust, organic, intuitive conception of self-evolution, using Jean Piaget’s theory of cognitive development as a seed, with psychoanalytic and humanistic psychology as well as existential and moral philosophy as supportive structures.

In his book The Evolving Self: Problem and Process in Human Development (1982), Kegan posits six stages or evolutionary balances the self could employ to organize experience and make meaning: (0) Incorporative; (1) Impulsive; (2) Imperial/Instrumental; (3) Interpersonal (4) Institutional/Individual; (5) Inter-Individual/Inter-Institutional.  Although the first phase characterizes infancy, these stages stretch well beyond childhood, the period so overemphasized by other developmental theorists. Kegan’s balances are not mere milestones to sprint past on a linear race to life’s final finish.  They can be envisioned as nested layers of context—veritable interrelated Russian dolls of conscious awareness—from which the self, once embedded, organismically emerges, always with increased mental complexity and, consequently, with an upgrade in perspective.

Transformation, however, is never painless.  Elaborating on the Piagetian concept of decentration, what might seem superficially to be an agreeable levelling up to the next order of consciousness actually, in Kegan’s view, involves the destabilizing loss of one’s center of balance—departure of the very subject of one’s being.  During the transition between stages, the center of one’s self is removed and relegated to the forefront of one’s perceptual field, where this former subject (i.e. what one is) can be examined and utilized as an object (i.e. what one has).

Once only looked through, this former lens of self can now looked at, as the middle issues out to the margins. Each successive center is constructed, defended, subordinated, surrendered, and reconstituted as the self evolves, while the culture in which the person is immersed plays its own part in this evolution.  Taking up where child psychoanalyst Donald Winnicott left off, Kegan elucidates precisely how one’s environment can serve to provide confirmation (holding), contradiction (letting go), or continuity (staying put for reintegration), either facilitating or complicating the enterprise of development. 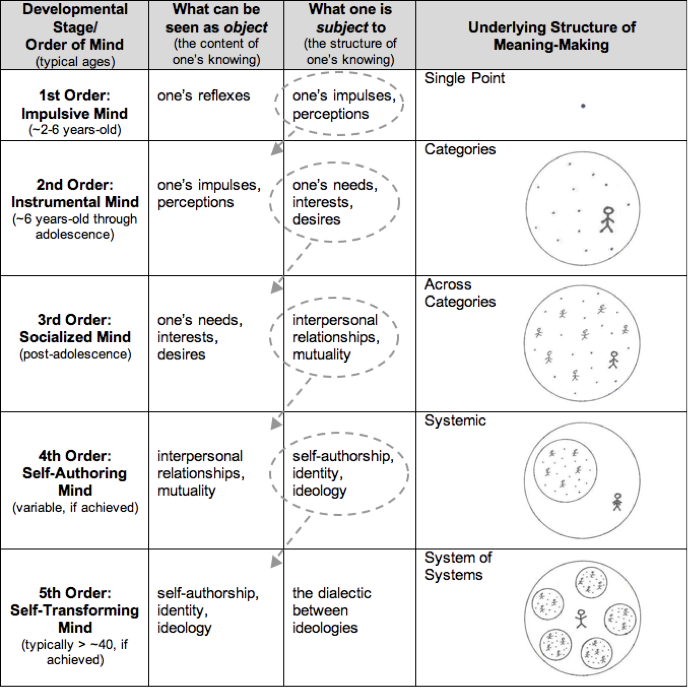 After over a decade of testing and refining his original theory (for example, evolutionary balances became orders of consciousness), Kegan authored another book, In Over Our Heads: The Mental Demands of Modern Life (1994), further clarifying his framework by applying it to the real life predicaments adults frequently face in their attempts to satisfy contemporary expectations regarding love and work.  The critical process of transitioning between stages—how it occurs and, particularly, the manner in which it is often resisted—has become the focus of his more recent efforts. In Immunity to Change (2009), Kegan and his co-author Lisa Lahey Ed.D. shine the spotlight on the world of work and on the barriers people consistently erect, frustrating their own improvement goals and preventing the natural transition between adult orders of mind:  Socialized (Stage 3); Self-Authoring (Stage 4); and Self-Transforming (Stage 5). Together they lay bare the key to surfacing the hidden commitments we harbour that keep us stuck, as well as the overarching assumptions that give rise to these commitments, so that lasting, adaptive change can occur.  Kegan and Lahey have written several additional books and co-founded Minds at Work, a professional development, coaching, and coach training service, based on their immunity to change methodology.